It’s hard to believe that it has been 30 years since this Shannon Band started out in September 1987 with an original line up of Derek Cronin on keyboards, John Madigan on bass, Darragh O’Connor on drums and Cathal McLaughlin on guitar and vocals.   The band started off doing some cover versions of popular songs at the time with the rest of the set being filled with catchy melodic original songs.  Derek Cronin left the band to pursue his own musical career leaving a gap which was filled by local keyboard player Conor Cullinane.  One September by this time were recording demos of their original songs building up to the release of their only single “Wishing”.    In addition to good airplay on local radio stations, the single received good air play on 2FM which in turn led to the band touring all over Ireland and a couple of mini tours in the UK.   That line up kept going until 1992 when the band members decided they would try different things.

Darragh, having returned from playing music in Ibiza in 1992 with two other Shannon musicians (Joe Sullivan and Sean Hughes), decided to put a new version of One September together.   The band headed back to Majorca the following year where they mainly stayed for the next four seasons playing music to all the party animals that visited Majorca and Santa Ponca in particular.   While in Spain, they were joined by Limerick musician Alan Sheehan.  Pat Hayes and Cathal Jones also joined the posse of Spanish musicians later in 1997.

On their return to Shannon in 1998, One September had evolved into a four piece band with Darragh, Sean, Joe and Alan.  That format stayed going until 2001 when Alan left to form Woodstar and Cathal Jones joined the band on piano.  After well over 10 years of hanging around with the band, it was decided that it would be easier to bring Pat Hayes on board rather than get rid of him so sometime around 2010 the Band was now a 5 piece band.   Sean Hughes took a break from the band in 2014 to be replaced by Alan Sheehan, keeping the tight “family” feel to the band giving it a unique bond stretching back over 30 years.

While the gigs are much fewer and further between than the 1990’s, the band still land in unsuspecting bars every so often bringing their own brand of music and craic with them.   They are playing on Saturday 9th of September in the Marquee at the Shannon Festival where they hope to be joined by their friends and neighbours in Shannon for a party to celebrate their 30th anniversary.   If anyone has any old photos of the band or any old stories (within reason…….!) please send them through to our Facebook page.   See you all there.

This is how they do it!

Aaahh here..... put a bit more feeling into it 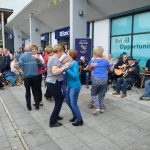 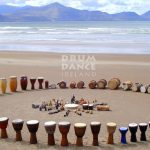